Two-thirds of consumers who receive federal subsidies to help offset the cost of Affordable Care Act (ACA) health insurance say they would likely be uninsured if the ACA was scrapped, according to a new survey by eHealth.

The results are one measure of the stakes surrounding a much-publicized court challenge – Texas v. The United States -- that could lead to the landmark 2010 health care legislation being declared null and void.

The eHealth survey was conducted in July and included voluntary responses from more than 800 participants who bought ACA-compliant individual or family health insurance plans from eHealth.

More women than men could be without coverage

While 66%  of respondents who received subsidies to buy a health plan said they would probably be uninsured without the ACA, just 16% of those who don’t qualify for subsidies said they would likely be without insurance if the law were dismantled. 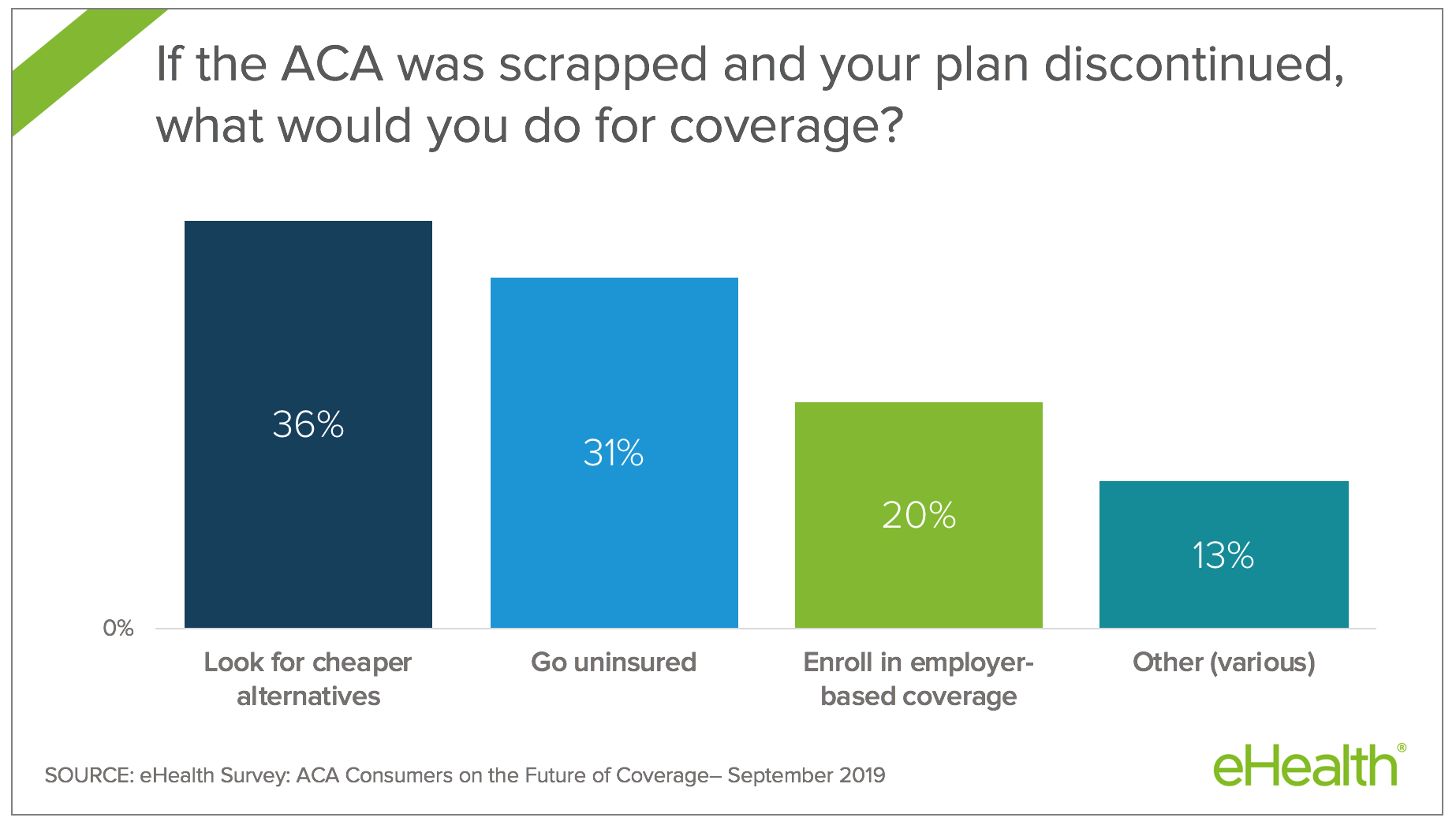 Among people with ACA coverage -- both subsidized and unsubsidized -- who were asked what they’d do if ACA plans were no longer available, 36% said they would look for less costly plans like short-term health insurance, 31% said they would go uninsured, and 20% said they would enroll in employer-based coverage. More than a third of women responding to the survey (36%) said they would be uninsured without the ACA. That compared to 23% of men who said the same.

The ACA’s immediate fate for now resides with a three-judge panel at the U.S. Fifth Circuit Court of Appeals in New Orleans. The court is reviewing a 2018 federal trial court’s decision that concluded the ACA was unconstitutional due to the 2017 decision by Congress to eliminate the penalty associated with the individual mandate.  Also known as the minimal essential coverage provision, the individual mandate required all Americans to purchase health insurance or pay a tax penalty.

According to the original court decision, by eliminating the penalty, Congress removed an “essential” element of the law and thus invalidated the entire ACA.  The appellate court ruling is expected sometime this fall.

The underlying district court decision came in response to a civil suit initially brought by the state of Texas and later joined by 17 other states, which sought to have the ACA declared unconstitutional.

Although a ruling against the ACA would likely be appealed to the U.S. Supreme Court, the possibility that the law may be invalidated could mean the end for a number of provisions and reforms popular with American consumers. Beyond federal subsidies that help offset the cost of insurance, these include protections for those with pre-existing conditions, coverage of young people up to age 26 through their parents’ health insurance policies and coverage of preventive care at no cost to the patient at the time of their visit.  Congress would likely need to pass new legislation to preserve these protections.

About 12.1 million Americans are currently enrolled in individual and family ACA health plans, according a recent report from the Centers for Medicare and Medicaid Services. Of these, 8.3 million receive federal, income-based subsidies, while 3.7 million do not.