eHealth Small Employer Survey: Neither President-Elect Trump Nor Obamacare Impact Hiring Decisions For Most; Nearly Half Considered Dropping Coverage, But Few Have 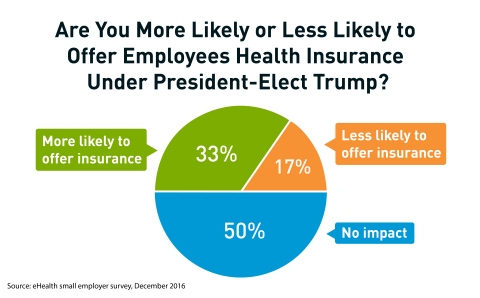 “We talk to small business owners on a daily basis and many of them tell us they’re in a tough spot,” said eHealth CEO Scott Flanders. “They want to provide employees with health insurance, but costs keep going up. That’s where eHealth comes to the rescue. We can help them understand the other group coverage options available and help them customize benefit packages that can meet their budget and keep employees happy – and off the rolls of the uninsured.”

The survey explored employers’ feelings about the time they dedicate to managing employee benefits, about offering group coverage, and about the future of the Affordable Care Act (ACA or “Obamacare”) in the incoming Trump administration.

One-in-five (22%) said the ACA has had no impact on the way they manage benefits, and slightly fewer (18%) said the ACA had driven them to offer more competitive health insurance for employees.

Employers that were able to manage employee benefits with little or no paperwork saved nearly an hour per week (1 hour vs. 1.9 hours) and two hours during open enrollment when compared to those employers who reported moderate-to-heavy paperwork when managing employee benefits (7 hours vs. 9 hours).

Additional highlights from the survey:

All survey participants were currently offering group health insurance coverage to employees. Most did so out of a sense of moral obligation (39%) or to retain their talented employees (29%). In spite of this, more than four-in-ten (43%) have entertained the idea of dropping health benefits for employees in the past. One-in-ten have gone so far as to actually stop offering group health coverage for a period of time.

Among those employers who had thought of dropping coverage in the past, the number one reason they continued to offer employee benefits was because they felt their employees could not afford to purchase health insurance on their own.

Additional highlights from the survey:

The findings above were compiled from a voluntary survey of small business owners who are currently offering group health insurance coverage to their workers and had purchased such coverage through eHealth. In general, the small businesses in question had fewer than ten employees. The survey was conducted by eHealth throughout the month of August 2016 with a follow-up survey conducted in November after the election. A total of 116 responses were collected.

* Percentages may not add to 100% due to rounding, or because respondents selected answers that are not included in the summary provided here.