Surprise Medical Bills and Medicare for All: Insurers Have Their Say

In a recently published survey of 17 health insurers in the Affordable Care Act market, eHealth asked insurance companies for their take on two issues that have been in the news a lot: Surprise medical bills and “Medicare for All.” Here’s a summary of what we found.

Surprise Medical Bills
When you use your health insurance coverage for a visit to the hospital or doctor’s office but then discover you’re on the hook for more out-of-pocket expenses than you expected, that’s a surprise medical bill.

Most insurers will tell you that although there’s been a lot of media coverage on the issue, and surprise bills are a significant problem for many Americans, they do not see it as a bigger problem today than it has been in recent years.

73% said they have seen no significant increase in the reports of surprise medical bills in recent years. While 18% said that complaints had increased, 9 % said complaints had gone down. 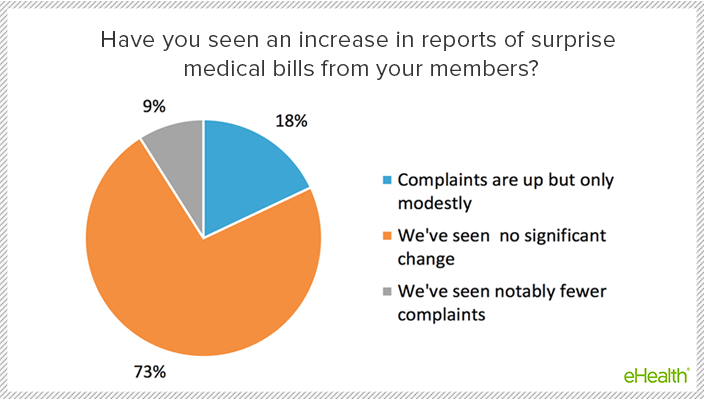 To be clear, insurers are not disputing the existence of surprise medical bills or the enormous strain they place on consumers, but most indicated that they don’t think the new attention given to the issue is driven by a recent increase in the frequency of surprise bills.

Medicare for All
“Medicare for All” has also dominated news coverage in the past year. Proposals to expand Medicare or Medicare-like coverage to all Americans take various forms, but the idea can be broadly summarized as a plan for some form of government-backed and guaranteed coverage.

eHealth has been tracking insurer’s sentiments on this issue since 2018. In our recent survey, we found that most insurers are watching the discussion but don’t expect them to ultimately translate into policy changes. 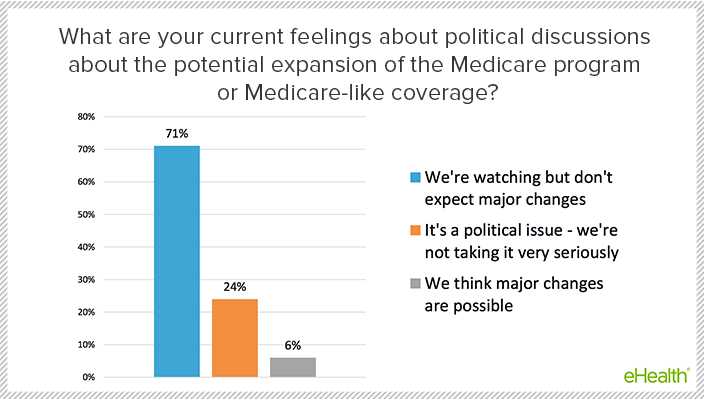 71% of insurers responding to eHealth’s survey say they are monitoring the “Medicare for All” discussion but don’t expect major changes anytime soon. That’s compared to 67% who said the same the year before.

At first blush, it sounds like insurers’ feelings on the issue haven’t changed much, but when you dig a bit deeper you see that fewer insurers this year believe that sweeping changes are likely to occur in the near future as compared with the year before.

Nearly a quarter say that the “Medicare for All” discussion is primarily a discussion taking place in the context of politics. That’s significantly higher than the 7% who said the same the year before.

Only 6 % think big changes are possible in the future, compared to 27 % the year before.