Results from a new survey conducted by eHealth suggest insurers selling Affordable Care Act (ACA) health plans have confidence in the market, with many looking to expand their footprint for the 2020 plan year.

More Health Plans in the Market for 2020

eHealth surveyed 17 health insurers in the ACA market that are collectively responsible for insuring approximately 80 million Americans and offering ACA coverage in all 50 states. Among those who responded to the survey, 60% said they intend to broaden their participation in the ACA market next year, while 33% will maintain their current levels of market participation. 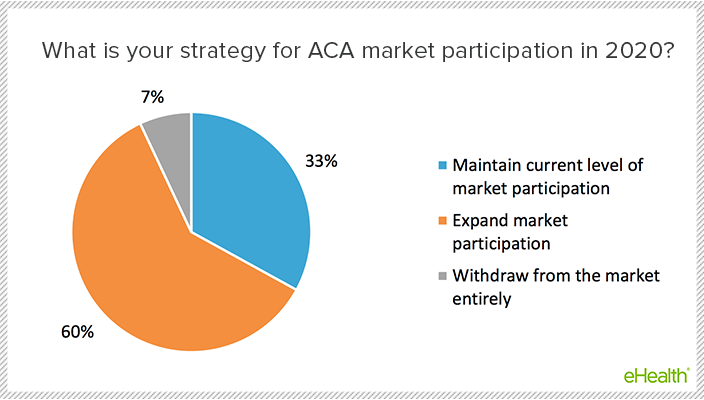 Nearly half of respondents (45%) said they intended to add to the number of plans they’ll offer in 2020, compared to only 21% who said the same last year.

When it comes to health insurance premiums, more than half of insurers (56%) are predicting that rates will either stay flat or drop. A third (33%) do not expect to make any noteworthy changes to premiums, while 23% expect to reduce monthly premiums by 5% or more.

Among those predicting an increase in premiums next year, 42% said they expect to raise rates between 5% and 10% as compared with 2019.

Looking back at the ACA’s last open enrollment period (November 1 through December 15, 2018), most insurers said that sales for the current 2019 plan year roughly met their expectations.

Among those responding to the survey, 69% said that sales during the last open enrollment period were within 10% of their expectations. Fifteen percent reported that sales outpaced expectations by 10 to 15%, while another 15% of said sales were 10% or more below expectations.

For more insights on what’s to come for the Obamacare market in 2020, read the full report.